Pintxos in the Bizkaia capital

February 20, 2019
If I’m offered a drink, I’m looking around for a snack. I simply hate knocking back the booze on an empty stomach. Why in England is a measly bag of crisps or pork scratchings deemed an extravagance? For me the perfect bar crawl involves eating and drinking in equal measure. Which is why my heart and stomach fell so deeply for Bilbao, a city that embraces the art of picoteo or ‘bar crawling with intent to snack’.

For foodies that hate to share their carefully sought out culinary treats, pintxos win hands-down. These tasty bite-sized mouthfuls on sticks or bread topped with anything from crispy seafood to tortilla de patatas hit the spot every time.

Although you can find good pintxos anywhere in Bilbao, one of the most atmospheric places to wander is the busy narrow old town streets of the Casco Viejo. Commonly known as ‘Siete Calles’ or ‘Zazpi Kaleak’ in Basque, these seven streets formed the original medieval town and it’s here you can sample some of the best pintxos in the Bizkaia capital.

Most of the bars have been running for decades, and it’s best not to plan too much, just wander until you find a packed one and elbow your way to the bar and get stuck in! Open until the early hours of the morning, start at the Plaza Nueva and work your way round, then out into the warren-like alleyways of shops, bakeries and pintxos bars of the Casco Viejo. 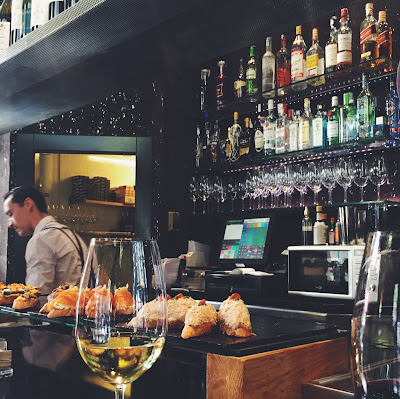 Don’t miss Gure Toki (c/ Plaza Nueva), which offers traditional pintxos with a modern twist "haute cuisine in miniature” such as grilled foie with apple and Pedro Ximenez sherry and soft shell crab. Always rammed but worth it for the friendly, attentive staff and good vibes.

And our other favourite bar, El Sacacorches  (c/Henao Kalea, 28), serves a great selection of fine wines and the best gildas in town. Great atmosphere with friendly locals – best to visit late afternoon or early evening.

Another place to sample a wide variety of pintxos is the Mercado de la Ribera, to the south of Casco Viejo, next to the river and by the Bridge of San Anton. The largest covered market in Europe, the small bars inside the food hall offer pinxtos that have all been prepared using fresh ingredients from the market stalls. Although there has been a market in the same location since the 14th century, the stunning art-deco style Ribera market was built in 1929 by the architect Pedro Ispizua and was very modern for its time. 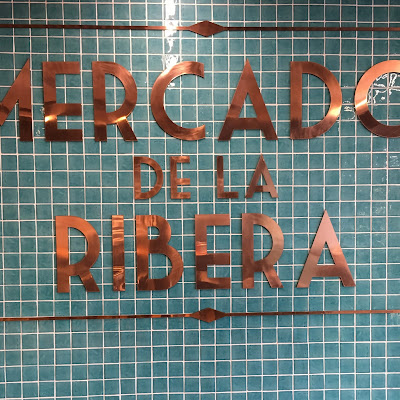 Popular posts from this blog


Staying at Ancient House Resort on Cua Dia, a small boutique hotel with spacious, immaculate and stylish rooms. Can imagine that this would be a good place for honeymooners, as the service is discreet and the gardens and pool are beautiful. Got an upgrade on the second day to a room with a balcony so I can now sit outside and write, which is a marked improvement.

I get free bike rental here so I’ve been out exploring. Riding a bike after so long and in Asia was a thrilling experience. Make me think how much quicker I could get about and see so much more. Today I cycled off the beaten track for a good 2 hours until I came to a boatyard where I pulled up for a refreshing drink. Don’t think these people see many white faces round here. I was drinking alone then suddenly there were about 15 faces staring at me. Curiosity got the better of one old man who hopped on his moped and escorted me down the road! I noticed that even this far out, huge speakers blast out propaga…
Post a Comment
Read more

February 25, 2019
My spec dark comedy feature script Hurricane Betty started out as I'm sure many great ideas for a film do – with a drunken, almost unbelievable dinner party anecdote. A friend-of-mine shared his childhood memory of a journey to France that turned into a farcical road trip. That night lying in bed wired on espresso martinis, I fell in and out of dreamtime, all the while I was living out the story as a film. I knew then I had to write the script and from there on in, the words have just rolled onto the page.
I’ve been obsessed with road movies since I watched a mild-mannered commuter stuck behind a wheel in Spielberg’s surreal cult road movie Duel. All my favourite films seems to involve a car journey at some point; The Straight Story, Little Miss Sunshine, Planes, Trains and Automobiles, Y Tu Mama Tambien, Wild at Heart… I could go on and on!
Nothing beats the adventure of a road trip. Travelling seems to draw out the best and worst in people, and in my opinion a car is the perfect …
Post a Comment
Read more

July 23, 2019
For a completely different take on Athens may I suggest you visit or stay in Pangrati, a residential neighbourhood set behind the Panathenaic Stadium. Known to the locals as Kallimarmaro, it’s an often-overlooked area that is now full of great restaurants, shops and bars, all at non touristy prices. Less obvious than Kolonaki or Monastiraki, Pangrati is close enough to the city centre yet far enough away to give you a local flavour of the daily rhythm of everyday life in Athens. Start-ups are slowly adding a much needed boost to Athens as it emerges from its decade-long economic crisis. No more so than in Pangrati, whose low business rates attract small businesses keen to make a mark. You can eat and drink to your heart’s content around the three main squares of Varnava, Proskopon and Plastira, with new places popping up each month. You’ll find most of the action on Empedokleous Street – which essentially cuts through the heart of the neighborhood –  or in one of Pangrati’s many leafy…
Post a Comment
Read more